For one special weekend the Connecting Hearts project will be installed at Adelaide Botanic Garden. Walk the spiral of hearts on the Conifer Lawn in front of the Santos Museum of Economic Botany on 13 and 14 April between 10am and 4pm.

During March, 188 people attended workshops at the Migration Museum and made 461 clay hearts. The Adelaide hearts will be joined by 1500 hearts made previously in Sydney to create a large spiral on Conifer Lawn at the Adelaide Botanic Garden. Visitors are invited to walk the spiral, pick up a heart, unwrap it and record a response to the question: ‘who belongs?’

Connecting Hearts is a participatory art project that began in Sydney (2016) and has continued, including travelling to London (2018). The project invited people to make small clay human hearts at workshops at the Migration Museum led by artist Penny Ryan. Participants also had the opportunity to reflect on their own connection to those currently moving across the globe. Current debates on migration often focus on the divide between those who are accepted as belonging and those who aren’t. It is easy to forget the hearts we have in common. 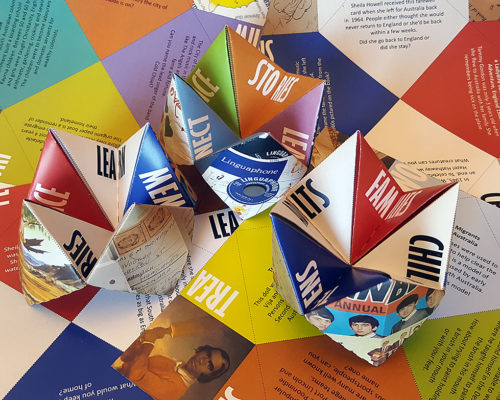